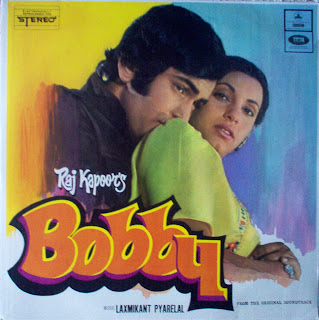 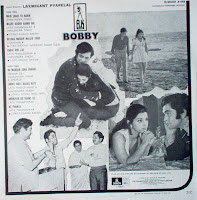 Bobby ,this is an example of a soundtrack that is better than the movie (there is some bad acting, but that seems to be a must in Bollywood). I know Bobby was a hit, but I think it was in most part because of the songs, the Laxmikant Pyarelal team really came to it's rescue. Bobby is a really fun soundtrack , it's light, and just makes you dance. This is the first 70's album I ever heard, it's not very experimental like Rahul Dev Burman's famous soundtracks, but it does have it's own charm, even if it's a little cheesy.

The movie is most known for "Main Shair To Nahin", it's a good track, but as you have all surely noticed I like songs that are upbeat, like"Jhoot Bole Kauva Kate", witch is the second part of a duo of a first part mexican styled song called, "Na Mangun Sona Chandi" that I don't really like. After there is "Mujhe Kuchh Kahna Hai" (tum tum TUM...!), it is a bit slower but is a fun track, I like it. "Chabi Kho Jae" (If you watch the video: one pieces rock!,....Cough!) 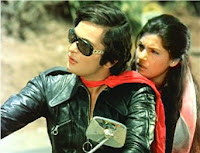 "Beshark Mandir Masjid Todo" is like a track from a completely different movie, with Chandal's unique voice, it's interesting. As is "Ae Phansa", a groovy track a little reminiscent of the 60's, I really like the instrumental bits.

There is a cool track, here , but I think it's only available on a special Bobby Lp, if anyone has it, I would like to know the name of that song. Thanks 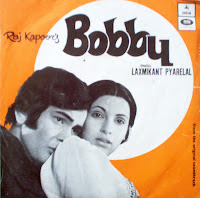 Here are an 7'' and a cassette for Bobby as well.

Get the music Now : Laxmikant Pyarelal | Bobby
Posted by Stella_1 at 5:20 PM 8 comments: 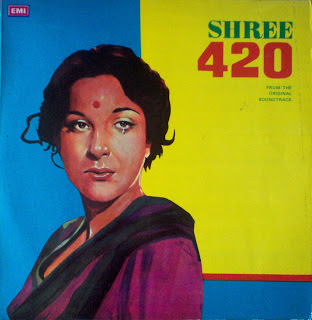 Another version of Shree 420 for Pakistan. It is missing the second half, with the male vocals, of "Ichak Dana Bichak Dana", but it has an additional Instrumental track of "Pyar Hua Igrar Hua". But it dosen't make up for the missing half of a song, that is why my rating is lower for this album. 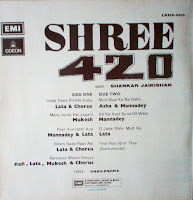 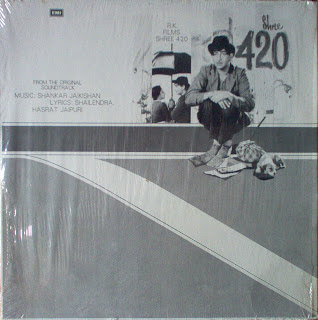 Shree 420 is an other classic score by Shankar Jaikishan, to me it's almost like a sequel to Awaara (see post of Awaara). The hits and my favorite songs on Shree 420 are "Mera Joota Hai Japani" (it's a classic), a 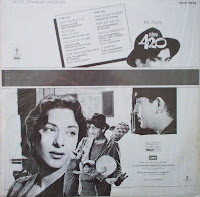 tune that critics indian society just after the independence in 1947, (here are some of the translated lyrics)

My shoes are Japanese
The pants are from England
The red hat on my head is Russian
But even then, my heart is Indian

and "Pyar Hua Ikrar Hua", a classic love song. It's playful, and at times you even feel a sadness when hearing it. Lata's and Manna Dey's vocals are great together.

Another thing I like about the soundtrack is the contrast, like for example, the rich "westernized" society is represented by the song "Mud Mud Ke Na Dekh" and the poor street society is "Ramaiya Vastavaiya".

Overall , a great soundtrack, I am not a fan of "O Janewale", but I like the charming little song, "Ichak Dana Beechak Dana", (the clip has English subs.) Can you guess?

For more info on the movie and songs there is a cool blog called filmi geek that talks about Shree 420, have a look. 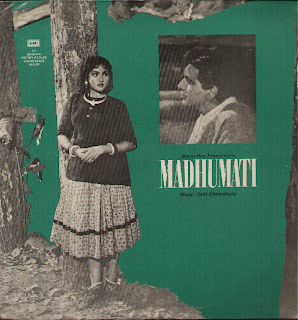 Madhumati is the only Salil Chowdhury record I have . I do not know any of his other music. But I can really hear the western influences, and I especially noticed the use of some guitar here 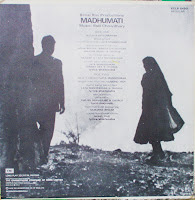 and there. The Madhumati soundtrack to me is very simple and alive. But I found it sounded sometimes too much the same from song to song. They are all good songs, but not great songs. The obvious popular tracks are "Dil Tadap Tadap Ke" and, a track I don't like, "Aaja Re Pardesi " . But my "coup de coeur" (french expression that means , the one that I instantly loved) is "Chadh Gayo Papi Bichchua inspired by folk music. A nice "village boy/village girl" song, it makes me dance and takes it's roots from the indian folk dance called dandiya garba. So, over all, this is a good soundtrack, but for me anyway, I feel there is nothing that is really super fantanstic. But it's worth a listen, so hear for yourselves.

I suggest, the last part the the second side, (I can listen to over and over again) it's 3 songs: "Tan Jale Man Jalta Rahe" ( don't let the deep voice scare you) , "Ham Hal-E-Dil Sunaenge" and "Toote Hue Khwabon Ne". They are very good . 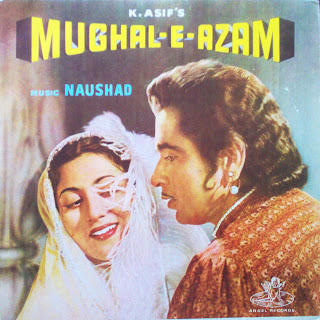 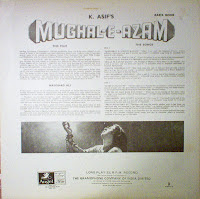 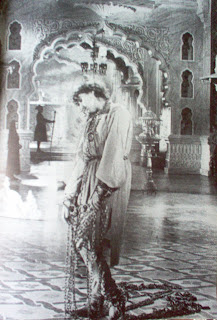 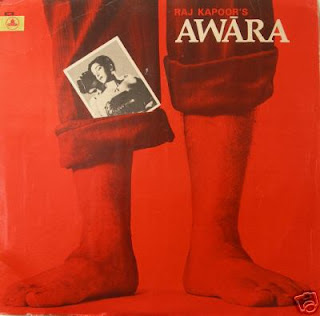 The first Bollywood Lp I ever got, Awaara is a classic. I can listen to the whole album; all the songs seem to have a little something special. The Shankar Jaikishan team certainly impressed me with my first taste of Hindustani (Indian) music. The hit songs from Awaara are “Ek Do Teen” sung by one of my favorite, but unusual voices, Shamshad Begum, and “Awaara Hoon” the title track. The songs that I really enjoy, well ….wait….I really do like all of 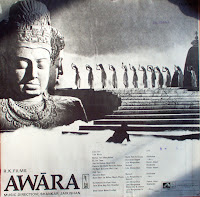 them. Ok then, so the one I like the least is “Naiya Teri Manjhdhar” because it’s just not that pretty to listen too then the others. But the last track, which is actually two songs but intertwined, ”Tere Bina Aag Yeh Chandni” and “Ghar Aaya Mera Pardesi” is especially impressive. The song takes us on a 10 minute ride into the fantastic imaginary world of the protagonist, a dreamlike world that with the help of Lata’s voice is very haunting. Manna Dey then takes over with the drums for the nightmarish part, and then Lata comes back with the dark but hopeful “Ghar Aaya Mera Pardesi”. The screaming at the end is a forerunner to what will come in Bollywood music in the 60’s and 70’s.


*Extra*: Something I Noticed About the Movie

I put the videos for fun, but some have English subtitles, so you can understand (unless you already speak Hindi). It was interesting and I was surprised at the directness in the song "Dam 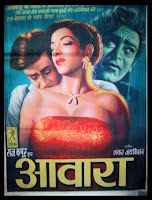 Bhar Jo Udhar Munh Phere" about sex, and towards the fact that they say they want to make love to each other and probably do. You would have never seen that in a popular American musical in the 50's. There is some sexual tension, at the end of "Ab Raat Guzarne Wali Hai" and I also have a supplementary clip that I found on you tube that either proves that Nargis and Raj Kapoor (the principal actors) were very good actors or were fery good lovers. You decide, and tell me what you think about the music and the clips.

I won't always do this but since it is easy to find all the clip for Awaara, I put them beside the track listing.
Tracks:

Before I "officially" start, I will give you a closer look at my collection. I prefer Bollywood music from the golden 50’s and the crazy 70’s. I have a few from the 60’s and 80’s, but the blog will not be in chronological order. You might find that I have a soft side for classical based soundtracks, but that is because I study Odissi (bollywood version), an Indian classical dance (the real thing). Also, in addition to the albums, I have 7 inches and tape cassettes that I will be sharing, that are even from all the way up to the 90’s. I will also be adding additional pictures, information on the composers, as well as, information of the films, actors, singers and directors. So please enjoy and thanks for reading.

For anyone that does not know what bollywood is , and you would like to learn here are a few sites that can help:

Also, for absolute beginners or for people who just want to discover different sides to Bollywood I suggest these albums by Nascente 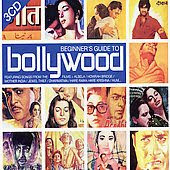 This is vol.1 of a three cd pack that makes you discover on each disc, the Vintage, the Funky and Modern sides of Bollywood 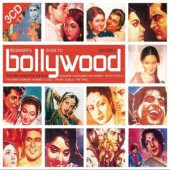 If you want to got further, because the first one was so popular, now you can listen to Bollywood Disco, Rock'n'roll and even the Kitsch sides of Hindi cinema.

If you need additional information please e-mail me at redhead344@hotmail.com