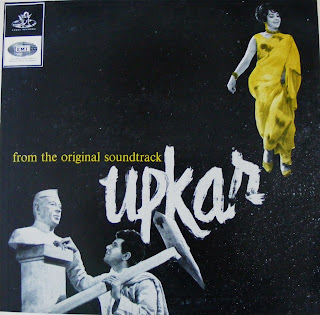 Even though I do not admire Manoj Kumar as an actor, I appreciate the films he has directed. Upkar as a film, is very evident in theme yet it’s experimental in its photo direction. And this is particularly evident in the song sequences with even make the music more notable (and sadly not the other way around).

The story is that of a young man played by Manoj Kumar, who is forced to sacrifice his education for his brother's played by Prem Chopra (looking quite handsome indeed!). Chopra’s character goes away to study and later returns as a young westernized and selfish man. Many of the themes in the film; East vs. West, Country vs. City and Rich vs. Poor are reflected in the brothers’ relationship.
On the side of the Indian simpleton with superior moral values is the patriotic song "Mere Desh Ki Dharati". It reminds me of the “we proudly work our land” type of patriotism found in Mother India (1957). The cover of the album also shows Manoj’s character admiring Nehru while holding a plow as in THE song of the album.

You don't need fancy lounges or glamorous city clubs, just check and see how much "Punjabi style" fun you can have with the village song "Aaye Jhoomke Basant". I dare you not to dance!
The next song "Gulabi Raat Gulabi" is associated with the "EVIL" West! (you know, Wizard of Oz's Wicked Witch of the West type of West or the Pardes (Sharukh Khan version) type of West). But it's one of the best songs on the album, sung by the one and only Vamp Queen Asha Bhosle. The song is divided into two parts. Asha sings to the consumerist westernized party goers and the second part is sung by Mohd. Rafi as images of hungry and miserable street goers are shown as they try and survive in the slums.

No sharabi (alcohol) for you mister!
Also, lend an ear to "Kasme Wade Pyar Wafa" and "Diwano Se Mat Puchho".
It's a classic film and soundtrack, but not one of my personal favourites. I absolutely recommend watching the film, Kamini Kaushal and Pran are amazing!

Get the music now: Kalyandi Anandji Upkar (link to Music From the Third Floor, because my computer is STILL broken.)
Posted by Stella_1 at 1:05 AM 13 comments: