Books on Indian film: Part 1 (or the lack of good books on indian cinema)

Introduction (and complaint)
A while back I had an assignment to write on Raj Kapoor and his films for a cinema class. And I very soon came to the conclusion that there isn't much out there for people that need serious info on Indian cinema or subjects strongly related to Indian film, such as studies on it's music, gender relations, religion, sociology, philosophy etc. These subject are important because a whole state of mind is unconsciously portrayed in mass and popular Indian cinema. For a film to be seen and accepted by the people of India of all castes, religions, ages and sexes means that the commercial cinema of India brings together universal indian and human values shared by all. It would not take long to figure out what these values are because they are expressed in cinema on the 1st degree. But what is more interesting is the cinema that speaks out, that is unclear and experimental. Cinema that is independent from the major studios and also challenges the mind. That is what usually attracts film scholars*, therefore writing books on cinema.

* I just want to mention that I think every film, even if they are big blockbusters, like Kabhi Khushi Kabhie Gham, Dilwale Le Jayenge or Devdas could easily have many layers and underlined meanings and opinions, but I personally believe that there is not enough dept (compared to independent cinema) to attract film scholars to study the films in further detail.

But alas, it seems that not much serious work has been printed up to date (in English or French anyway). Many books claim to talk about Indian Cinema, but too many are voiceless and empty books pretending to be about Indian film. This makes it hard for me to learn correctly and traditionally about Indian cinema.
So this series of posts is dedicated to various books, good one's (the one's worth reading) and bad one's (the one's to avoid). I think that many authors took the opportunity to write about Bollywood or popular Indian cinema just to capitalise on the growing international phenomenon. So let's try and focus on the real books.

One of the first and oldest books (in English) on this subject, is called Indian Film written in 1963 by Erik Barnouw and S. Krishnaswamy (son of film director, K. Subrahmanyam). My verdict? Basically, I loved this book. There is so much info cram packed about the Indian film industry in every page that you just can't stop reading it. It is so great!

One chapter that I find interesting is called "Ordinary, Decent, Superdecent" (p.168) . It's a

brief overview about women and there place in Indian cinema thought history. It starts with naming a few of the first screen stars of the of the silent era. Some examples are, Sita Devi (Renee Smith), Sulochana (Ruby Meyers) and Lalita Devi (Bonnie Bird). Most of which were Anglo Indians (no caste and outcasts by both Indian and English society) because not even Indian prostitutes would go into film. Later, in the 1930's, Durga Dhote and Devika Rani, changed the perception of women working in Indian cinema by being both of the Brahmin caste (high caste) and were accepted as film stars. But after the war, women were categorised and payed differently depending on five categories. The classes and there daily wages where, "Ordinary Girl" 5R, "Decent, class C"10R, "Decent, class B"15R, "Decent, class A" 20R and "Superdecent" 25R to 40R. Also, if you could dance that was a plus. Now (late 40's- early 50's and beyond), the film industry had women from all background appearing and working in Indian cinema.

Oh yeah, the next two chapters, "Pagents for our Peasants" (p.172) and "O Divine Tamil"(p.177) are great too, they are about the rise of Tamil cinema, and it's invasion on the Hindi film Industry during the late 50's, but you will have to read those on your own. 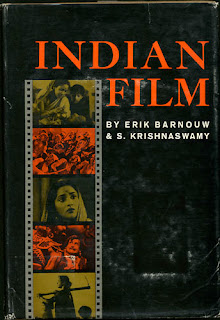 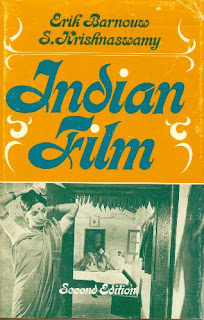 Pictures - First Edition, 1963 and Second edition, 1980
Upside
The book talks about a variety of symbols in Indian cinema and there historical, political, religious or social meanings. So foreigners, like me, can understand the films better.

Even if it is not necessary to have a background in film studies, you could encounter problems or confusions while reading the book. It is very useful, when reading Indian Film, to have some good knowledge of the history of cinema and it's main figures in Hollywood and the world film industries a like.

One thing that it does not do, is analyse specific films in detail. It's not a book about certain people or specific films. So if that is what you are looking for, this is not the book for you. (It didn't help me for my essay on Raj Kapoor and his films.)

Since it is an older book, some facts might be outdated. Although it was republished in 2001-2002, I do not know if it was reedited and updated for the present times.
Stella_1's score: 4.5/5

Next is Bollywood: A History by Mihir Bose
Posted by Stella_1 at 12:40 AM

Email ThisBlogThis!Share to TwitterShare to FacebookShare to Pinterest
Labels: Books

Hey, thanks for this---I hadn't even heard of this book. Sounds very interesting!

I love Mihir Bose's book, too, I think it's one of the best published on the subject.

And btw, who is the actress you've pictured in this post next to the section on "Ordinary, Decent, Superdecent"? She's lovely.

Thanks for your comments Memsaab. The actress and one of the co-founders of Bombay Talkies is the beautiful and great Devika Rani.

Thanks for the recommendation! I'll try to find this at one of my local libraries.

I just read a really great book called Emotion Pictures: Cinematic Journeys into the Indian Self by Narendra Panjwani, a journalist for the Times of India. Using himself as the primary example, Panjwani examines the role that Indian films (mostly of the 50s and 60s) played in the lives of Indian moviegoers. I really appreciated Panjwani's view of film as a positive cultural force, which is so different from most of the writings I was subjected to as a film studies major.

The book is broken into eight chapters: "A Small Town Goes to the Movies"; "Cinema and the Language of Love"; "Ishq Aazaad Hai!" [Love is Liberation]; "Where Do Heroes Come From? Some Post-Gandhian Answers"; "Manliness in Movie-Made India"; "The City in Popular Cinema"; "Enter the Wandering Migrant"; and "Cinema, Songs and Us".

I can't recommend this book enough. Besides being an enjoyable and informative read, it is handsomely designed and chock full of movie stills.

You can probably find it at your local university library. It's also available at Amazon.com.

Thank you very much duriandave. That book sounds interesting because it's about the emotional affects and significants of indian cinema. I will keep that one on my wishlist for when I am a little richer (it's like 90 $).Thanks

Another book on Bollywood to look forward to! Hopefully my library has it.

Cant wait to see your review of Mihir Bose's book. It was fun to read but I could have done with more of ancient movie-lore and less of the angry-young-man and his successors.

So I got this book b/c of your recommendation and am LOVING it. I think Mihir Bose drew quite heavily on it for his book too :-)

Thanks so much for bringing it to my attention!