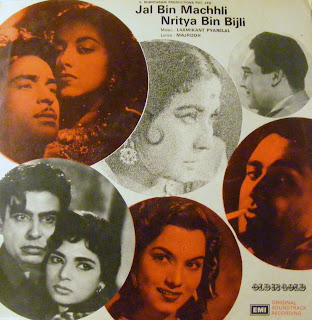 This is a great soundtrack and, in my opinion, one of Laximikant and Pyarelal's best. Jal Bin Machhli Nritya Bin Bijli is a bit on the experimental side, but most of the songs are based on very simple melodies. The main character of the film is a young woman with a passion for the arts, more precisely song and dance. So this album suits the film well in the sense that the music must be very theatrical and grandiose (two defining features of later films by V. Shantaram) to be incorporated with dance. Most songs have long instrumental intros, breaks or outros that create strong emotional and atmospheric moods.

One of the most famous tracks is "Taron Men Sajke Apne Suraj Se" inspired by this famous song (I would be surprised if you have never heard it before, but I posted the link anyway) from the classic spaghetti western, The Good, the Bad and the Ugly (1966). Original music by the famous composer Ennio Morricone. 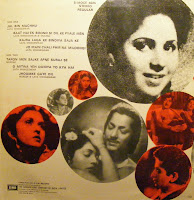 Also the title track "Jal Bin Machhli" is also well known. In the video the heroine dances and tries to imitate a gold fish out of water. There is also a new remix version (2005) by Akriti.

"Baat Hai Ek Boond Si Dil Ke Pyale Men" brings back memories from an obscure Disney film from 1985, called Return to Oz. I don't know if it's the fact that in this film similar music, by David Shire, is used to create a very creepy setting or atmosphere. It is present in a scene when Dorthy, once in Oz, meets a princess who collects the heads of many young women to use as her own. Return to Oz Clip (You hear the music at around 2:40 into the clip and the section I am referring to in the Jal Bin Machhli song is an instrumental bit starting at 50 sec). I would also like to mention that this comparison is totally unimportant to this post and that it is only a personal connection that I made.
So continuing, the best example of theatrical music on this record is a song I enjoy, "O Mitwa Yeh Duniya To Kya Hai". The last instrumental part gets quite "groovy" for the time. The clip has such great interpretive dancing. 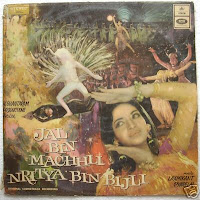 For the rest of the album, the other songs do not impress me as much, but are also good.

I posted the original cover of the Jal Bin Machhli Nritya Bin Bijli vinyl which I find amazingly bizarre and psychedelic. I love it!

Thanks once again, Stella!


Nice to see another gem posted by you.

Haha, was about to download this as the cover was unfamiliar (and I'm never able to remember long titles), then recognized it from the original (which I have). You're right, it's one of L-P's best!
PC x

thanks for another goodie! Glad you're back in the old record biz.