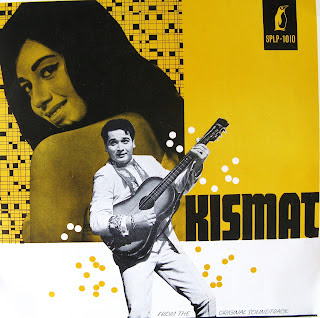 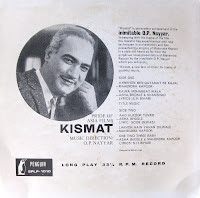 Thanks for uploading! I been watching te You Tube Clip for "Aao Huzoor Tumko" for a while but i couldn't find the music.
Maybe you can tell me what's the song about...

Thanks for the review. I am writing an article on Kismat on wikipedia. Wanted to use the vinyl record images for the wikipedia article.

Let me know if I can use them.

Thanks for letting me use them in wikipeda. But for uploading it in wikipedia, I would need it to be released under a particular license.

If you could look into this page and let me know which license I can release it under:

Generally, images on Wikipedia are licensed under Creative Commons licenses, that is, people are free to use and distribute images but must credit the original author.

Waiting for your reply wrt license.

Is there any way to contact you by email? I was unable to find it anywhere in the blog.

Hi, I'm sorry about that, you can use the Creative Commons license (the first one). Thanks, have a good day, and have fun writing the article!