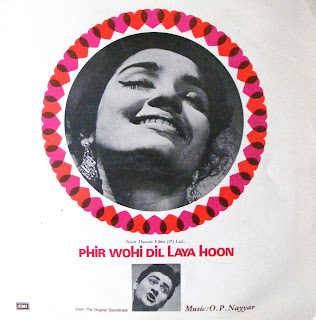 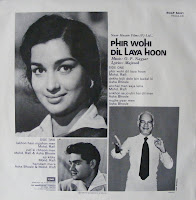 ed on a spinning picture of me looking confused and demented. The album cover was a trap! And it only got worse as I realized that there is not 1, not 2, but 3 "horse trotting songs" on the same record. Didn't I just mention in my last post that Nayyar needed to crank up the originality button. If some people couldn't hear the constant auto-copying last time (Kashmir Ki Kali or Kismat), this record is certainly proof of it. If some people don't know what type of song I am talking about, a standard O. P. Nayyar soundtrack has at least 1 song with a beat that resembles the sound of a horse trotting. Too name a few examples, you have Naya Daur's "Maang Ke Saath Tumhara" or "Piya Piya Mora Jiya Pukare" from 1955's Baap Re Baap " and then the less evident "Deewana Hua Badal" from Kashmir Ki Kali or "Dekho Kasam Se Kehte Hain" from Tumsa Nahin Dekha, and I could go on. 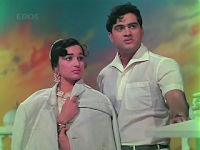 My favorite song has to be "Dekho Bijli Dole Bin Badal Ki" probably because it is inspired by classical music, but I also think that I have a weakness for dance battles especially in Indian movies (e.g. Vijayantymala Vs unknown in Amrapali, Vijayantimala vs Helen in Prince or Padmini vs Vijayanthimala in the tamil film Raj Tilak). Also, even though I like classical music I also enjoy O. P. Nayyar's Punjabi inspired songs, which in this specific film is shown in "Aji Kibla". 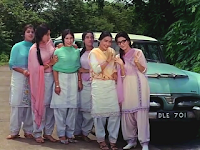 I would simply like to end this post by saying that my intentions are not to bash O. P. Nayyar, I even applaud him for having succeeded in the film industry without having musical training or using the instant success magnet Lata Mangeshkar. I also applaud him, for his courage to be different and original at the beginning of his career and not following the latest craze, but making one instead. But as I once said, there is missing something, especially at the stage in his career of Phir Wohi Dil Laya Hoon. The folk songs seem to be fuller but most of the time you can almost listen to this album and not even know when the songs change from one to the other because the mood and style do not vary much through the record. And as I have said before, I still find that his music becomes more and more unoriginal as time passes, especially after listening to more and more of his work. But even with that said, I cannot say that this is a bad soundtrack, just an unimaginative one.
Thanks and Enjoy!
Both screencaps are from Apni East India Company

Tsk tsk tsk... such dislike of horse trotting! lol Thats usually how I identify his music too, if the horse trots are missing, chances are that it was composed by someone other than Nayyar. I think Usha Khanna did something similar with Dil Deke Dekho songs because I always think of it as OP Nayyar's music! Still, I think most of us listen to the lyrics (they are beautiful) and Rafi-Asha's mesmerising voices, not to mention the beautiful people onscreen, and the horse trots just fit the picture. Needless to say, I love the songs from this film especially horse-carriage Banda parvar one.

O.P. Nayyar is one of my faves, personally. But I know he tended to borrow from himself a lot.

I haven't delved into this soundtrack much yet, but I wanted to say thank you for posting the soundtrack that has "Dekho Bijli Dole Bin Badal Ki"! It's worth it for that song alone, as far as I'm concerned.

And I love the dance competition.

You mentioned a few other dance competitions... The famous Padmini vs. Vyjayanthimala competition was in Vanjikottai Vaaliban.

But the one that this scene reminded me of most was Kamala Lakshman vs. Kuchalkumari in Konjum Salangai (1962):

I like how they danced on separate circular stages in both of these... Was that a common setup back in the day?

I'm sorry, but I'm addicted to horse trotting songs. I need it three times a day, every day.