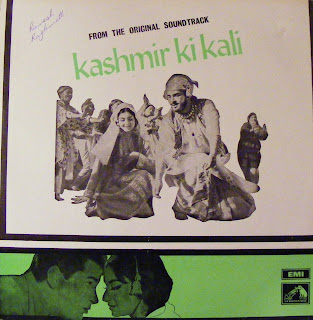 The film, Kashmir Ki Kali , introduced Sharmila Tagore to Hindi cinema (she is of course Bengali, and is a distant relative of the TAGORE. Previously, she acted in two Satyajit Ray films, World of Apu (1959) and Devi (1960)) co-starring with an always charming and overly expressive Shammi Kapoor. Even though the film is set in Kashmir, generally for many films, O. P. Nayyar, who is Bengali (Jan. 12th Correction who is Punjabi), focuses on Punjabi folk which I consider to be Nayyar's forte (strength). 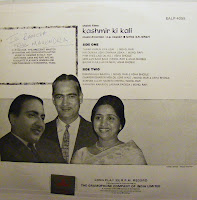 The film was a big hit and the soundtrack as well, but I truly think that it was Shammi Kapoor's persona, more than O. P. Nayyar's songs, that helped sell records. Because I find the music not bad, just uninspired.

Two tracks which I enjoy are, firstly, my favorite, "Subhan Allah Haseen Chehra" with Rafi's wonderful voice on the most melodious song on the record, accompaning some folk instuments and harmonium. Secondly, "Meri Jan Bale Bale", (love "Punjabi Shammi" ! My hea 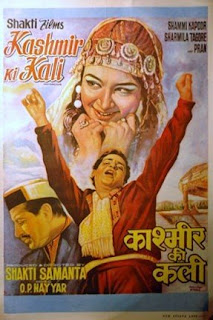 rt goes oy! oy! bale bale!) is a great song but Asha's voice isn't Punjabi sounding at all (Shamshad or Noor Jehan would have been better) and is missing a little authenticity. Though Mohd. Rafi is not "authentic" compared to let's say Gurdas Mann, but he seems to get away with it more easily.


I also enjoy, "Diwana Hua Baadal"but honestly I am not impressed with this album. Maybe my hopes where too high, but I am beginning to become too familiar with O. P. Nayyar's work, and the more I listen too his soundtracks, the more it's all sounding the same. It sounds as if Nayyar would say: "I'm cool. I am the highest paid music director. I sound western and rebellious. Come targeted urban youth! Want to rock'n'roll?". Ah, but this type of music would later become either a musical and creative trap for O. P. Nayyar (or a way to make easy money in the film music industry by duplicating his own style, either way it's starting to get to me. I mean, give me Naushad or give me R. D. Burman, but not the squeaky clean somewhat repetitive attempt to be different. C. Ramchandra was western before him and Shankar Jaikishan could imitate Nayyar better than he could imitate himself with rock'n'roll songs (e.g. Gumnaam, Junglee) which had at least some melody. I know I'm a sucker for classical inspired albums or really wacky musical gems , but O. P. Nayyar is on the bottom in my best composers list. Ok, ok, I will stop this useless rambling, everyone is entitled to their own opinion. So I hope you enjoy the record more than I do! I encourage you too watch the film.


In the 60's there was Kashmir Ki Kali, now we get Mission Kashmir? Sad. One day peace will come and we will be singing and dancing in Kashmir once again.

Thanks for this :-) I LOVE the songs, all of them; it's one of my favorite Shammi soundtracks (and that's saying something!)...

I love all the songs, except "Balma Khuli Hawa Men" and "Kahin Na Kahin Dil Lagana Padega," which also I do not hate precisely. I do agree with you that Shammi's persona helped the movie a lot, but I also beleive the songs, Pran and Kashmir were all participants to this movie which refuses to sie- then again, I amy be partial to the songs 'cos the family played em on LP all the time while I was growing up :)

I LOVE this soundtrack, though I agree about Nayyar's music being repetitive. He was lucky to have great lyricists and singers, and thats probably what make his songs so popular inspite of their sameness in the musical dept. And he was a Punjabi (not a Bengali) like Rafi, which is why there is so much Punjabi folk in his music and Punjabi touch in Rafi's singing, though the latter's voice was perhaps too refined for folk music as you note.

Oups, sorry O. P. Nayyar is from Lahore (I've been reading about so many music directors for my future post on filmi books that I got a little confused, sorry). I made a correction in the post. I must also add that it is true that I can't take the lyrics in consideration because I can't understand them, yet at the same time I am not criticising the lyricist at all. It is mostly the musical duplication of O. P. Nayyar’s style that is a shame, because I know he can write good music (believe me, even if I don’t like a certain “phase” is his career, doesn’t mean I don’t like everything he did), and this is a good soundtrack, but he could have put more effort in the originality department. Thanks for everyone’s comments, and by the looks of it, you like the soundtrack anyway.

Thanks - anything Shammi is good by me. Have the DVD - now maybe I should watch it!