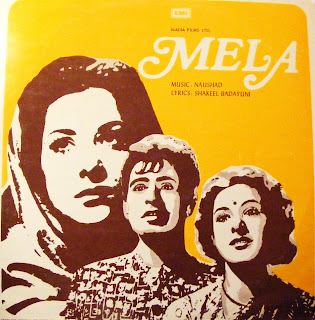 Mela's soundtrack creates a great mood inspired by romanticism, a certain "attractive despair", as I could name it, that is characteristic of a time in Hindi cinema, (and as far as I know maybe to other Indian cinemas as well) called the 40's. But this being 1948, I could also blame this "depression" on 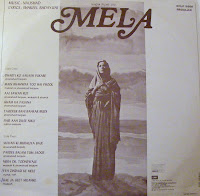 a certain, um, let me think...Partition. I think it's a mix of both the melancholy of the country's separation mirrored in the lover's separation that set the tone of the film and it's music. Also, the film visually looks like a filmed play as the director uses theatre to show the insignificance of the backdrop and the importance on concentrating more on the emotions and the characters (which Naushad picked up on and developed in his music). Also, I think, in those days, theatre had more prestige then cinema and early in the development of the film industry the only reference for cinema was theatre. Bizarrely enough, this does not take away from the realism, not portrayed visually but musically (emotionally as well) of the two main heroes Manju (Nargis) and Mohan (Dilip Kumar).

The 40's was the heyday of the "sad song". Not the kind you feel like skipping or fast forwarding, but the kind that people actually liked, and still like even today. One brilliant song "Gh

am Ka Fasana" is one of the finest examples of a great "sad song", and it is also my favorite track on the record. Naushad could have picked the melody queen, Lata or, Geeta, the empress of tragedy, but he chose Shamshad. I think he was looking for something raw. Her voice expressed the voice of the people, like the persevering village girl that wants more than what is destined for her. Mela is a high point in her career, although Shamshad's luck did not last long, when the "classical trend" came in the early 50's, Shamshad did not have the training to stay at the top.

Besides the classic sad song, some of Mela's most memorable tracks are, one of Mohd. Rafi's first big breaks with the song ''Yeh Zindagi Ke Mele'', and another one of my favourites ''Aai Sawan Rut ''. For the track ''Phir Aah Dilse Nikli'' you can almost imagine that you are sitting in a zeenat during the very late reign of the Mungals. (Well, at least that is what I imagined the vocals would have sounded like.)
Some other tracks I enjoy are the playful ''Pardes Balam Tum Jaoge'' and the duet ''Mera Dil Todnewale''. In the second one I mentioned, you can really hear the Talat Mehmood influence for sure, who was the usual voice of Dilip Kumar. He's not singing for Raj Kapoor that's for sure.
Overall good soundtrack, resembles Babul (my post) but let's Shamshad really shine trough. Inspired by emotion and the northern sound this album can seem dull on the first try, but the more you listen the better it gets. Enjoy!

Another good one that I wish I'd noticed and downloaded before.

Really good stuff... Always happy to hear Shamshad Begum, and I am very eager now to find more Zohrabai Ambalewala songs wherever I can find them. Plus, there's
Naushad's great music, the voice of young Rafi, Mukesh..and I love attractive despair!